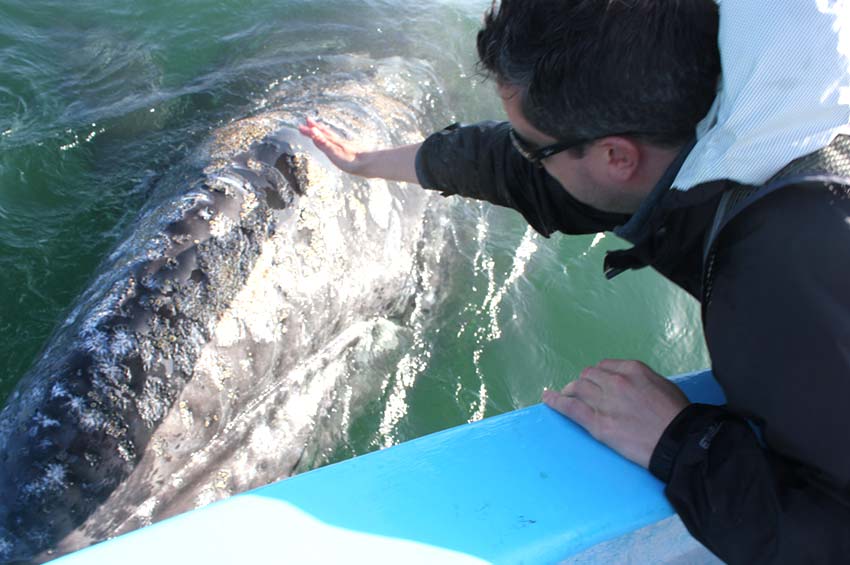 NRDC has a long history in Laguna San Ignacio, one of the last unspoiled nurseries for Pacific gray whales in Baja California Sur, Mexico. NRDC’s President, Rhea Suh, recently described her “deeply moving, thrilling” encounter with the whales of the lagoon. One critical reason our efforts to protect the area have been so successful is the participation and dedication of the local community.

I just returned from my first visit to the Laguna, where I represented NRDC alongside other members of the Laguna San Ignacio Conservation Alliance (LSICA)—International Community Foundation (ICF), Pronatura Noroeste and Wildcoast—at an assembly meeting of Ejido Luis Echeverría Álvarez. The ejido represents the local community and comprises the fifth, crucial member of the Alliance. Since 2005, the LSICA members have worked together to ensure continued protection of the lagoon. During my visit with the ejido, it became clear that this success story is a triumph for both environmental conservation andsustainable community development.

A brief summary of the campaign

In 1995, Mitsubishi announced plans to build a massive industrial salt works at Laguna San Ignacio, which would have had dire consequences for the gray whales. NRDC and an array of local and international partners launched one of the largest environmental campaigns in history in response. Our message to Mitsubishi was clear: “You Can’t Do This.” The campaign culminated with the cancellation of the salt works project by then-President Ernesto Zedillo on March 2, 2000.

For members of the ejido, this was just the beginning of the story. After the victory, NRDC and our partners began work with local communities around the lagoon to encourage sustainable economic alternatives and to forestall a revival of the salt works scheme. In 2005, the Alliance secured enhanced permanent protections for the key lands around the lagoon. The LSICA has now established protective measures on almost 340,000 acres and some 150 miles of coastlines. It has secured conservation easements on 140,850 acres on ejido and private properties on the east side of the lagoon. The Mexican government has granted Pronatura Noroeste a conservation concession for 199,040 acres of federal lands on the west side of the lagoon, and Wildcoast has secured concessions to protect 150 miles of beach and mangrove areas around the lagoon.

In exchange for those concessions, LSICA established a Conservation Trust Fund to provide annual payments to the ejido for sustainable community development projects. The Alliance then negotiated a servidumbre ecológica (similar to a conservation easement) on 32 privately-owned land parcels in Ejido Luis Echeverría Álvarez, which span another 20,850 acres. In 2014, the National Forestry Commission, CONAFOR, awarded Ejido Luis Echeverría Álvarez funding and recognition for its restoration and forestry conservation work on the easement properties. Likewise, the ejido has continued to monitor the conservation easement area. This has led to a more rapid response system to ensure that the whales are protected from harm.

Lasting impacts for the community

In the assembly meeting, the ejido and other LSICA members expressed enthusiasm for future projects. In collaboration with Pronatura Noroeste, the ejido will participate in a pilot program to stop using plastic bags with a goal of eliminating plastic from the ocean. They have also begun planning for the construction of a community center for the public, which they envision as the physical infrastructure that would undergird their flourishing social pride and belonging. In these diverse ways, the Alliance is expanding its strategic focus from land conservation and marine mammal protection to sustainable community development.

The “victory” in Laguna San Ignacio may have happened 18 years ago, but NRDC’s ongoing engagement in the area with local partners continues. This particular World Heritage Site and Mexican biosphere reserve has become not just a sanctuary for whales and birds, but also a legacy of NRDC’s past and a model for conservation campaigns to come.